Patient Page: Why is AL #amyloidosis bad for kidneys?

"Amyloidosis" refers to any one of several diseases in which abnormal protein fibrils accumulate in a person's organs. The most common type is called AL amyloidosis, and the protein fibrils are made up of fragments of antibody proteins called light chains. I posted a slide which illustrates what a light chain is in a previous post ("Why is AL amyloid bad for hearts?"). In AL amyloidosis, the levels of light chains (usually lambda type, but sometimes kappa type) in the blood and urine are elevated.  Light chains are made by plasma cells in the bone marrow, and current AL amyloid therapy targets these plasma cells.

Any organ's function can be compromised by amyloid deposits.  The kidney is one of the most commonly affected organs, and patients with injured kidneys may have symptoms, including swelling (edema) of the legs, decreased urine output, and lightheadedness due to sudden drops in blood pressure.

A summary of kidney anatomy and function relevant to amyloidosis: 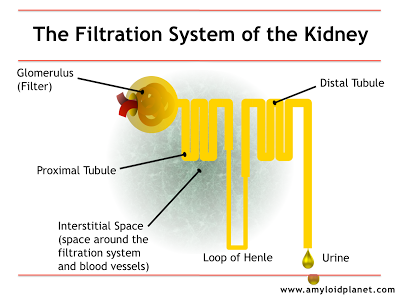 If you want to know more about normal kidney function, see the clear, easy-to-understand post by my friend, nephrologist Joel Topf, in his blog Precious Bodily Fluids.

Light chains can injure the kidneys in a number of ways.  Like albumin, normal light chains are filtered through the glomerulus and then taken back up in the proximal tubule.  The receptors along the lining of the tubule which do this are actually the same for albumin and light chains (cubilin and megalin, if you were wondering).  Problems develop if the light chain levels are abnormally high or if the light chains have an abnormal tendency to form clumps of strands. 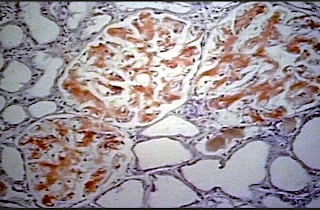 Kidney transplant has been undertaken in a limited number of patients with myeloma and/or amyloidosis. A major concern is that the same disease-related processes which caused the original kidneys to fail will recur in a transplanted kidney. Also, the fact that patients with these diseases often have limited survival independent of kidney function begs the question of whether precious  donor kidneys are best used in this situation. With newer therapies leading to higher remission rates and longer survival in both myeloma and AL amyloidosis, the idea that it may be time to revisit the conventional wisdom about organ transplantation is gaining traction (like here).

Lets call it a wrap. While I call this a "Patient Page," I used a lot of medical terminology. I tried to define everything in common language. Even so, it is probably clear I expect a lot from my readers. If there is anything in this page which requires clarification, TELL ME. Email me, or post it as a comment. I want the content of this (and every) post to be as clear and helpful as possible.
Posted by Dr. Jeffrey Zonder at 12:48