The first two #amyloidosisJC chats were a huge success, and with this installment we hope to build on that. The second journal club, in particular, was fantastic. With Raymond Comenzo (Tufts), Vaishali Sanchorawala (Boston University), and Brendan Weiss & Adam Cohen (both from Penn) participating, it felt like we had the Eastern Conference All-Star team playing. Not to mention over a dozen other engaged participants. This week, with an extremely interesting article on anti-fibrillar therapy being discussed, maybe we can tempt the Western All-Stars into joining...? Mayo? MDACC? Stanford? I'll pester them. Whoever suits up this week, I am certain Drs. Adam Waxman and Brendan Weiss (same Brendan Weiss) will co-moderate a thoughtful and educational discussion.

[special thanks to Dr Waxman for his hard work preparing the original draft of this summary!] 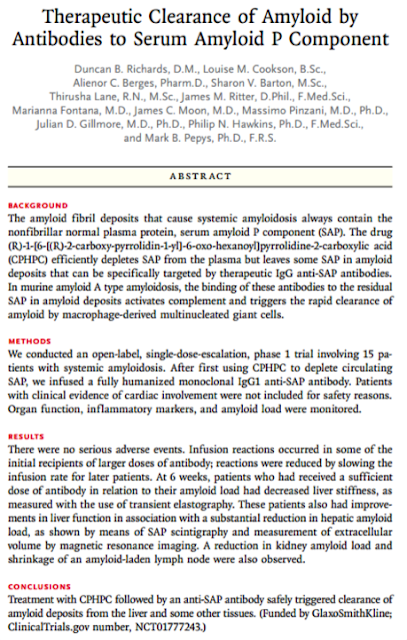 The systemic amyloidoses are rare diseases characterized by protein misfolding, leading to insoluble amyloid fibril tissue deposition and consequent organ dysfunction. It is the organ deposition, particularly cardiac, that leads to morbidity and mortality. There are over 20 subtypes of systemic amyloidosis. Immunoglobulin light chain (AL) amyloidosis is the most common subtype and is characterized by clonal plasma cell or B-cell expansion and production of misfolded immunoglobulin light chains (LC) that form amyloid and also are directly toxic to organs. Commonly affected tissues and organs include the kidney, liver, heart, and spleen. Currently, the treatment of AL amyloidosis focuses primarily on prevention of light chain production through the use of anti-plasma cell therapy. In other systemic amyloidoses, there are no non-experimental methods to reduce the precursor protein that forms toxic amyloid fibrils. A fundamental problem in the management of the systemic amyloidoses is the development of a treatment to address amyloid that is already deposited in the tissues. A fibril constituent common to all subtypes of amyloidosis is serum amyloid P (SAP). This study explores an early but promising therapy that targets SAP with a monoclonal antibody to stimulate macrophage-mediated clearance of deposited amyloid, which has been previously shown to be effective in a murine model (Bodin, et al. Nature 2010).

The authors (Richards, et al.) performed a phase I clinical trial of a combination of a small molecule CPHPC ((R)-1-[6-[(R)-2-carboxy-pyrrolidin-1-yl]6-oxo-hexanoyl]pyrrolidine-2-carboxylic acid) that has been shown to deplete circulating SAP (serum amyloid P component) followed by administration of a humanized monoclonal anti-SAP antibody that has been shown in preclinical models to stimulate macrophage driven destruction of SAP-containing amyloid deposits. This study describes the first-in-human experience using these agents, including serial assessment of deposited amyloid load in tissues.

This is a prospective, single center (National Amyloidosis Center in the United Kingdom), open-label phase I dose escalation study of 16 patients. All patients had biopsy proven systemic amyloidosis; different types of amyloidosis were included. Patients with clinical evidence of cardiac involvement were excluded, as were potentially child bearing women.

CPHPC was administered for 3 days until SAP concentration decreased to below 2.0 mg/L. Patients then received escalating doses of anti-SAP antibody. The last 7 patients received a tailored dose based on the pretreatment SAP load as determined by SAP scintigraphy.

Changes in tissue amyloid content were assessed by whole-body I-SAP scintigraphy at baseline and 42 days post-treatment. Patients were also assessed for retention of tracer at 24 hours by CT. Equilibrium MRI of the heart, liver, and spleen as well as transient elastography (to measure liver stiffness) were performed on days 6, 14, 21, and 42). 42 days was chosen as this was the length of time for SAP to reach equilibrium between the plasma and amyloid components.

Correlative studies of immune markers showed that the 9 patients receiving >200 mg of antibody had a transient increase in IL-6, IL-8, CRP, and serum amyloid A protein. Patients receiving >1 mg/kg had a prolonged decrease in complement C3 levels for about a week.

Patients were assessed for amyloid elimination at 42 days after treatment. 6 of 8 patients with liver involvement receiving >200 mg of antibody had a significant decrease in liver stiffness. 5 of these same 8 patients had an overall improvement on their SAP scintigraphy corresponding to decreased amyloid load at 42 days. MRI showed normalization of extracellular volume in 3 patients. Figure 1 shows representative decrease in C3 level and changes in SAP-scintigraphy in patients 8 and 13.

·       Infusion of anti-SAP antibody after CPHPC infusion was safe in patients with systemic amyloidosis with relatively low, transient, infusional side-effects

·       6/8 patients receiving >200 mg of antibody showed evidence of reduced amyloid load on imaging, even in patients who presumably had continued production of amyloidogenic precursors Including some patients with active AL amyloidosis)

The optimal dosing and timing of CPHPC and anti-SAP need to be further studied.

·      Delivery of this agent to patients with cardiac disease will need to be done carefully, as the impact of macrophage phagocytosis in the heart on cardiac function is not yet known.
Posted by Dr. Jeffrey Zonder at 16:56