#amyloidosisJC 12/1/2015: A staging system for renal outcome and early markers of renal response to chemotherapy in AL amyloidosis.

This is the 5th and final pre-symposium installment of #amyloidosisJC, with the following summary by travel grant awardee and article author Paolo Milani. Dr. Milani is from the esteemed Pavia Amyloidosis group, and is currently spending some time at Mayo Clinic. Needless to say, he'll be bringing a high level of knowledge to this journal club. Starting in January, 2016, #amyloidosisJC will be a monthly online journal club activity.

Immunoglobulin light-chain (AL) amyloidosis is caused by a usually small plasma cell clone synthesizing light chains undergoing conformational changes that lead to their aggregation and deposition in tissues. The kidney is involved in 70% of patients, but little is known on progression or reversibility of renal involvement. Renal involvement results in significant morbidity, and renal failure limits the therapeutic options. Previously, criteria defining renal response and progression were based on the International Society of Amyloidosis (ISA) consensus criteria of 2005 but the clinical significance of each have never been validated. The goal of this study was to identify and validate criteria by assessing the risk of dialysis in 732 consecutive, previously untreated patients with AL amyloidosis with renal involvement evaluated at 2 European referral centers: the Pavia Amyloidosis Research and Treatment Centre and the Heidelberg Amyloidosis Centre.

The databases of the Pavia Amyloidosis Research and Treatment Centre and of the Heidelberg Amyloidosis Centre were systematically searched for subjects with renal involvement diagnosed between 2004 and 2012. Baseline evaluation at each center included a complete physical examination, assessment of amyloid organ involvement, echocardiography, cardiac biomarkers measurement of serum creatinine concentration and of 24-hour urinary protein excretion, serum and urine immunofixation electrophoresis, and quantitation of free light chain (FLC).

The study end point was renal survival, defined as the time from diagnosis to dialysis initiation. The authors assessed the impact of baseline variables and of their changes with therapy on renal survival . The Italian cohort was used as the testing population and the German series as the validating cohort. 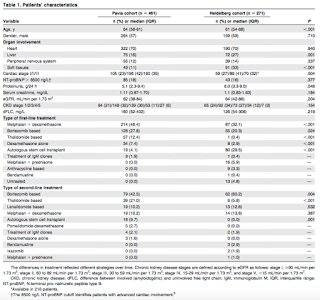 Patients’ survival from dialysis initiation was not significantly different in the 2 cohorts [median survival was 39 months in the Pavia cohort and 24 months in the Heidelberg cohort (P=0.102)]. Hemodialysis was chosen in most cases, and only 11 patients underwent peritoneal dialysis (9% of the 155 subjects requiring dialysis), 8 in the Italian cohort and 3 in the German cohort. 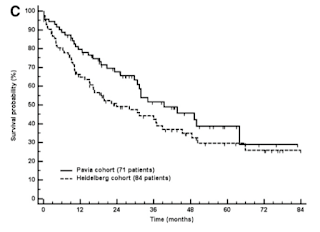 Factors predicting renal survival:
Renal survival was influenced by proteinuria, eGFR, and, to a lesser extent, by serum albumin. The thresholds best discriminating patients who progressed were 5 g/24 h for urinary protein loss and 50 mL/min per 1.73 m2 for eGFR. Based on these cutoffs, it was possible to design a staging system sharply discriminating 3 groups with significantly different risk of progression to dialysis, with none (renal stage I), 1 (renal stage II), or both (renal stage III) risk factors, respectively (Figure 1A). These results were validated in the Heidelberg cohort (Figure 1B). 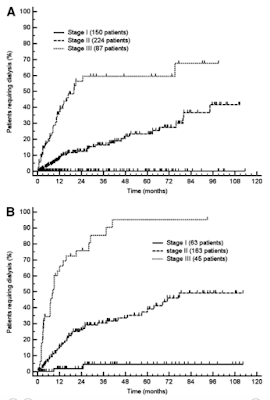 Criteria for renal resposne and progression:
For the identification of response and progression criteria, the authors performed a landmark analysis on 472 patients (64%), 301 in the Italian cohort and 171 in the German cohort, who were evaluated for response 6 months after treatment initiation. A ROC analysis based on progression to dialysis at 2 years from the landmark date performed in the testing cohort (Italian series) showed that changes in proteinuria, eGFR, and dFLC (difference between involved [amyloidogenic] and uninvolved free light chain) were able to discriminate subjects progressing to dialysis. The cutoff that identify renal response was a 30% decrease in proteinuria. A 25% decrease in eGFR identified a renal progression. Obtaining a very good partial response (dFLC <40 mg/L) or complete response (negative serum and urine immunofixation and normal FLC ratio) was able to improve renal outcome not only in renal stage II but also in renal stage III patients, indicating that successful treatment can improve renal outcome also in high-risk subjects.

Finally, they tested the applicability of the novel renal response and progression criteria, related to renal survival, in patients who had response assessment data at an even earlier time point (3 months), 133 in the Italian cohort and 69 in the German cohort, in a 3-month landmark analysis. Given the relatively small number of cases, they performed this analysis in the overall study population of 202 evaluable patients. We found that the proposed response and progression criteria retained their prognostic significance.

The progression of renal dysfunction is accurately predicted by baseline proteinuria and eGFR. These 2 variables identify low-risk patients who are unlikely to require dialysis and subjects who are at very high risk of renal failure. Secondly, early changes in eGFR and proteinuria should be used to assess treatment efficacy, in addition to the currently recognized hematologic and cardiac response criteria.

The renal staging system formulated by Palladini and colleagues significantly divided the population of patients with renal AL amayloidosis in low-, intermediate- and high-risk of progression to dialysis. This staging could be a useful tool for the routine patients’ management and could be added in the stratification of patients enrolled in clinical trials.
The identification and validation of renal response and progression criteria that can be assessed at 3 and 6 months is an other important implication of this work. However, it is important to note that the morbidity of renal involvement is not restricted to the minority of patients who develop end stage renal disease.

Finally, we think that it will be important to confirm these data in a prospective setting. Ongoing randomized trials would be the ideal setting.
Posted by Dr. Jeffrey Zonder at 21:56