Light chain (AL) amyloidosis is a rare plasma cell dyscrasia which causes morbidity and mortality through deposition of toxic amyloid fibrils. Although the prognostic significance of specific cytogenetic aberrations in the plasma cell malignancy multiple myeloma is established, the relevance of cytogenetics in AL amyloidosis is still being defined. Several recent retrospective studies including this study by Bochtler et al., have attempted to characterize the significance of chromosome aberrations in AL amyloidosis. This paper seeks to establish translocation t(11;14), as a predictive marker of poor response to bortezomib. This is important because bortezomib-based regimens (such as Vel/Dex) are often used as front-line treatment for AL amyloidosis. In this disease where patients often have progressive multi-organ damage, selection of an efficacious regimen to rapidly establish disease control is crucial. This paper raises the question of whether cytogenetic studies could guide treatment of AL amyloidosis.

·      After backward variable selection, validation and calibration of the final multivariable model was done using a CyBorD-treated cohort (32 patients). 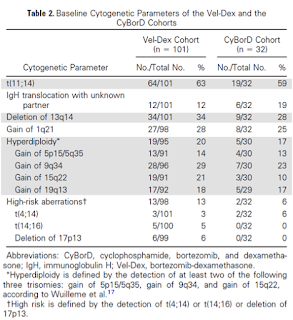 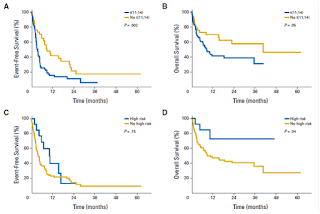 Multivariable testing in Vel/Dex Cohort with Clinical and Cytogenetic Factors

·      By Cox regression, t(11;14) and dFLC were the only two statistically significant prognostic markers for both OS and hemEFS. NT-pro-BNP reached statistical signification for OS. Thus t(11;14) is an independent negative risk factor in the Vel/Dex treated cohort.

Our Comments
Special thanks to Sandy Wong (@SandyWong02111) from Tufts University for her efforts preparing this summary. Looking forward to co-moderating this journal club discussion with her.